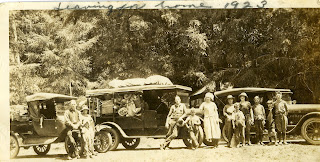 During the summer of 1923 the six year old child in the left side of the photograph and her twelve year old neighbor, Loretta Short, were lost for three days and two nights in the forests of Santa Cruz County in California. The child was Dorothy Hutchinson, my mother.

Each summer the Hutchinson clan would pile huge amounts of camping gear in their vehicles and drive down the narrow dirt road to Big Basin State Park for a month of camping. The men would stay for two weeks vacation and then drive back to work, leaving the families camped and returning on weekends.

The lost girls generated an enormous search with park rangers and volunteers combing the forest, searching through the night with gas lanterns and dragging the swimming area in a search for possible drowning victims. Here are excerpts from my mothers own recollections:

"We walked for what seemed like endless hours. I recall stooping over a little creek to get a drink and seeing a small yellow snake come gliding out from under the bank, at another point in our wanderings my shoe came off and went down a rather steep hill. Loretta was afraid to go down to get it because, she said, she was afraid she might not be able to climb up again.

We slept under the trees for two nights and Loretta covered me with an old sweater she was wearing. At one time during our wanderings Loretta found two slightly green blackberries and I can't remember having anything else to eat on our long journey...

When I grew up and had children of my own I finally had some inkling of what Mama and Papa must have gone through. Mama said that the thing that scared her most was the thought of the mountain lions which were populous in the mountains at that time...

I guess we finally found ourselves, because while we were following a creek we heard the sound of an automobile horn. It was being sounded by a woman who had become tired of waiting for her fisherman husband to return to the car. We rushed out into the clearing and were overjoyed to see grownups. They were very kind and had heard about the "lost children". They took us home and bathed us and fed us and put us to bed. It was wonderful when Mama and Papa showed up to take us home to camp."

The two girls had followed Waddell Creek to the Theodore Hoover ranch at the coast. It is possible that they were found by Theodore's brother and President-to-be Herbert, an avid fisherman who frequented the coastal streams around the ranch. They had walked somewhere between eight and twelve miles. Today there are maintained trails all along the route, but in 1923 the girls were true pathfinders.

I was the Director of California's State Park System in the 1970s and celebrated the fiftieth anniversary of the founding of the park system with a big picnic at Big Basin. My mother, who had taken us camping in the family tradition, sat at the picnic table with former Governor Pat Brown and told her story. A few years later she asked that her ashes be scattered in the redwoods and our family obliged.