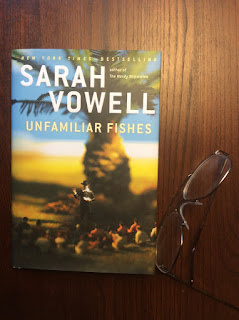 It is not easy to explain to people why Hawai’ians are blocking the road to the top of Mauna Kea on the Big Island. The protesters have slowed the construction of one of the biggest land based astronomical observatories ever. If you are of Hawai’ian ancestry, you are often asked why. And why the big protest over the geothermal energy trials at Kilauea Volcano a few years ago. If you read Sarah Vowell’s book you will begin to understand.

Vowell takes her readers from the early Puritan based religious fervor in New England through the missionary zeal that sent the Brig Thaddeus to Hawai’i, and beyond into the history of the Hawai’ian people and their conquerors. She chronicles the unfortunate coincidence of the isolated population’s lack of resistance to common diseases and how it coincided with the missionary’s zeal to convert a successful culture into a subservient population which, in today’s political world, has little power beyond that of protest. She writes with a wry humor that I find appealing even though it describes one of the saddest parts of our history.

The descendants of the missionaries who locked Queen Liliuokalani in the palace are characterized by her in quotes and comments from this letter from Lorrin Thurston to Sanford Dole, (italics added) "'I hope those who are drafting the constitution will not allow fine theories of free government to predominate over the necessities of the present situation.' He counsels against free speech because that would only encourage the native opposition: 'To treat them with forbearance and courtesy is like trying to disinfect leprosy with rose water,' He casually dismisses the need to guarantee a trial by jury, which had only been a bedrock principle in the English-speaking world for only, oh say seven hundred years."

Vowell goes on to talk of Thurston’s plan to disenfranchise Hawai’ians and Asian workers, to require loyalty oaths (which Hawai’ians refused to sign) as a requirement for having their vote count, and literacy tests borrowed from Mississippi’s post Reconstruction laws which disenfranchised Blacks. He also wanted to suppress a free press and deport opponents. More than twenty six thousand people signed petitions against annexation to the U.S. but Vowell describes how three prominent descendants of the missionaries went to Washington and convinced the Congress and newly elected President Mc Kinley to annex Hawai’i. Sarah Vowell doesn’t excuse the Hawai’ian royalty from part of the blame but you get the impression she believes that Liliuokalani would have straightened out the constitutional monarchy and made it work for Hawai’ians and others had she been given the chance.

If you read between the lines you will find the descriptions of the takeover similar to the arguments made by Hitler prior to the invasion of Poland and the Russians prior to their most recent “non-invasion” of the Crimean Peninsula.

So, today with Hawai’ians (bunched together with other Polynesians in the census) less than ten percent of the population in their own land, and with the trusts set up to guarantee them an education and health care, under challenge why not protest. There are plenty of cultural reasons to keep industrial sized projects away from areas considered sacred by Hawai’ians just as has been done by other Native Americans. Reading this book won’t change what happens in the islands but it will make you better understand the events.
Posted by Unknown at 9:30 AM