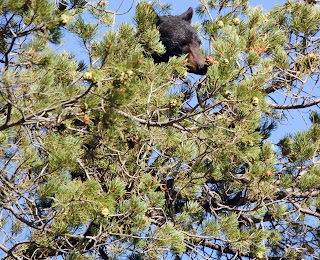 This is the last of the Yosemite Bear chapter. I had no treed Yosemite bear pics, so this Texas bear will have to do. Now I have to get on with writing the rest of the book. Expect it late this year. The Hawai’i novel Kolea should be out in electronic form sometime in July and in Print a couple of months later.Thanks for reading my blog.

(continued from #29) Not too long after that a yearling bear clawed a visitor in another campground. Often a young bear will “tree” if pursued. This one did so. In order to avoid shooting a firearm upward we would use a tranquilizer dart loaded with Sucostrin. The metal syringe cylinder is shaped like a short cigar and is delivered either with an air rifle or a bow and arrow. The thick bore needle on the device injects the chemical on impact and will tranquilize the bear. This bear had sent a woman to the hospital for cleaning and stitching so, unfortunately, it had earned the death penalty. We loaded the cylinder with a lethal dose, and I used the bow and arrow device and shot the dart into the bear’s buttocks.
As the poor beast crashed down through the tree branches a troop of Girl Scouts came out of the bushes behind us. Their leader was lecturing them. ‘The bear’s not dead, she said, “He’s just asleep. They’re going to take him to some remote place and drop him off in the wild.” The seasonal rangers looked at me for guidance. “Get the bear in the truck,” I said. They did so and the children gathered around as I started for the cab and a quick getaway. It was not to be. “Look!” one of the more observant girls said. “He’s not breathing.” The bear was dead but quivering from the effects of the drug on his nervous system. I ordered one of the rangers into the truck bed and said, “Pump on his chest.” As I drove away I saw in my side view mirror the skeptical look on the scout leader’s face. She knew. Around a couple of corners I stopped to get the ranger back in the truck cab. “That was quick thinking,” he said. “If it had lasted any longer you’d have been giving the bear mouth to mouth resuscitation,” I replied.
Some of the seasonal rangers were smarter than others. These were mostly college students working as rangers during their summer breaks. All were intelligent but some had very little common sense. One fellow was asked to take the bear trap out to a problem location and set it away from the camping area. He said he knew how to work the thing, so off he went with the pickup and trailer. After a couple of hours not hearing from him I sent another guy to find out if he was having problems. He found the first ranger trapped inside the bear trap baking in the summer heat. Ranger number one didn’t know what the little hatch in the front of the trap was for. Instead of baiting the trap through the little hatch and then cranking the big door up before returning to the hatch to set the trigger, he had entered the trap, hung the rotting bait on the hook and triggered the trap door shut on himself. We nearly had ourselves a baked ranger.