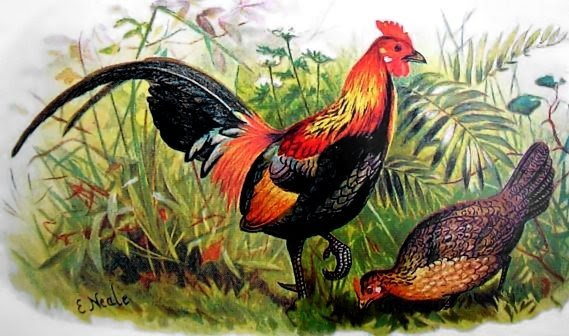 In 1971 a wild chicken showed up in our yard on the slopes of Maui. It would search for insects and seeds each day and return to the woods behind our place to roost each night. The hen looked exactly like the pictures I had seen of Red Jungle Fowl, the chickens brought to Hawaii with the first settlers. All domestic breeds of chickens are descended from these and the Grey Jungle Fowl found in the forests of Asia.

I obtained a rooster from the stocks at the Honolulu Zoo where Jack Throp had bred them and used the chickens on the grounds where they were not only interesting to zoo visitors, but ate all the dropped food left by visitors. A sort of Gallinacious serendipity.

That’s how “Super Moa” ended up on Maui. The hen was known to my kids as “Henny Penny” and she took to the rooster in a hurry and began laying eggs. My older two, Tim and Joan, were raising 4H beef steers but Matt was too small at age 8 to handle a steer, so he took over the jungle fowl. We ate some of the eggs, but the hen was pretty good at hiding them and soon there were little yellow chicks peeping away in the yard.

I discovered how tough these birds were when a mongoose showed up one day. The rooster was elsewhere, but the hen made some kind of noise and the chicks scattered into long grass and stayed perfectly still while the hen pulled her wings back behind her, squatted as low as she could and charged the mongoose. For those of you not familiar with the mongoose it’s like a big weasel. It’s the Rikki Tikki Tavi of Kipling’s Jungle Book; the one who fights the cobra. The chicken looked like a big feathered arrow as it screeched and charged. The mongoose took one look and high-tailed it. Literally.
The roosters were also aggressive. A stray dog was eying the chickens one day, and the rooster came from behind the house scooted silently up behind the dog and then screamed his battle cry as he erected all those green, gold and red-brown feathers and flew onto the back of the dog’s neck and went after its eyes. The dog escaped by running off a 10 foot steep embankment and tumbling to the road below where he ran off. There was a lot of strutting to follow, kind of like an NFL touchdown dance but a lot more colorful.

Matt separated the cockerels from the hens and raised them in a covered pen. He planned on fattening them up and selling them as fryers. But one morning we found the pen looking like a slaughter house. Seven of the nine or ten week old cockerels were dead and the last two exhausted looking birds, covered in blood, were facing each other to see who would be champion. We separated them and cleaned them up. Word got around the neighborhood, and there was a lot of interest among Haka Moa practitioners. Cock fighting was popular among ancient Hawaiians and the practice was still common on Maui and Molokai in 1971. Matt sold the remaining birds and didn’t ask where they were bound.


Thanks for reading my blog. There is a recent New York Times article about these birds at http://www.nytimes.com/2015/04/07/science/in-hawaii-chickens-gone-wild.html?smid=nytnow-share&smprod=nytnow&_r=0
Posted by Unknown at 12:56 PM