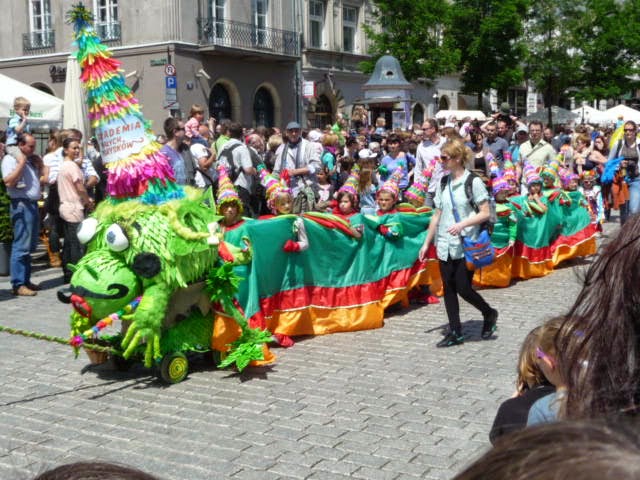 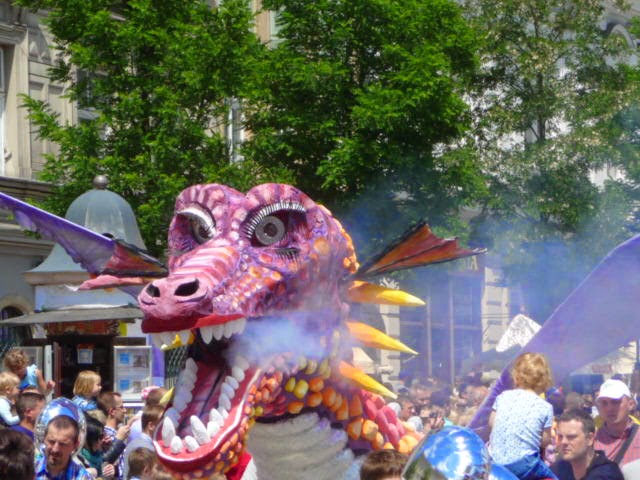 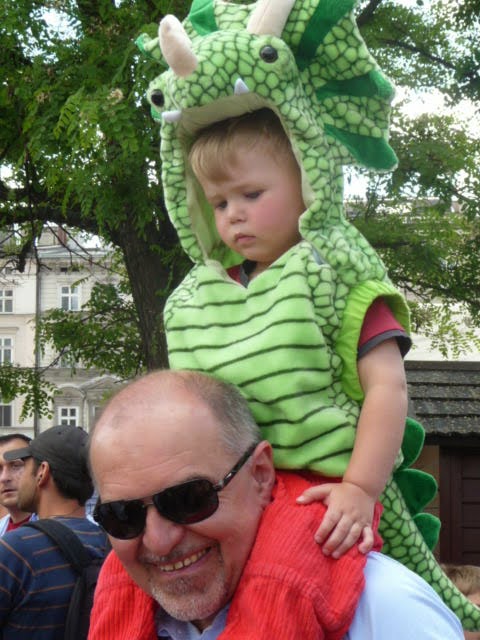 If you are in Krakow, Poland on June 7, 2015 you may join a hundred thousand or so Poles and their visitors in an enormous town square for the annual dragon bash. There is a rock concert, a "Lindy Hop" competition, - man these Poles have fun!- and the dragon festival. Dozens of dragons produced by children and their parents from all over Poland come for the parade. There are marching bands and all kinds of entertainment. Here's the background story:

It seems that long ago there was a nasty dragon denned up next to the Vistula River. He would come out in the daytime and forage through the countryside eating sheep and cows and  making a general nuisance of himself, People left the area and the king tried to get rid of the dragon by offering his daughter's hand, and I suppose the rest of her body, to anyone who could kill the dragon. Many knights perished in the effort.

Along came a young shoemaker who told the king he could get rid of the dragon. The shoemaker bought a sheep from a farmer, some mustard seeds, and a bucket of sulfur from a miner. He skinned the sheep, mixed the seeds, sulfur and some pitch inside the sheep's skin, and carefully sewed it closed. He placed the sheep bomb in the entrance to the dragon's den and hid behind a rock to watch.

When the dragon came out he saw the sheep and gobbled it up. In a short time he got a huge belly ache and started belching enormous amounts of fire. The dragon jumped into the river, swallowed all the river's water and exploded.

The shoemaker, who was named Krak, got the daughter, became King Krak and built the Wawel Castle on the hill above the dragon's den.

At the end of the dragon festival daytime events you can sit on the hill next to the castle and watch huge inflated dragons travel down the river in a lighted parade. They blow a dragon up, shoot off fireworks, and just have one heck of a good time. Oh, by the way, there are cake shops in the town square where you can replace the calories you spent walking all over the festival and Polish beer is fantastic for replacing your electrolytes.
Posted by Unknown at 9:09 AM