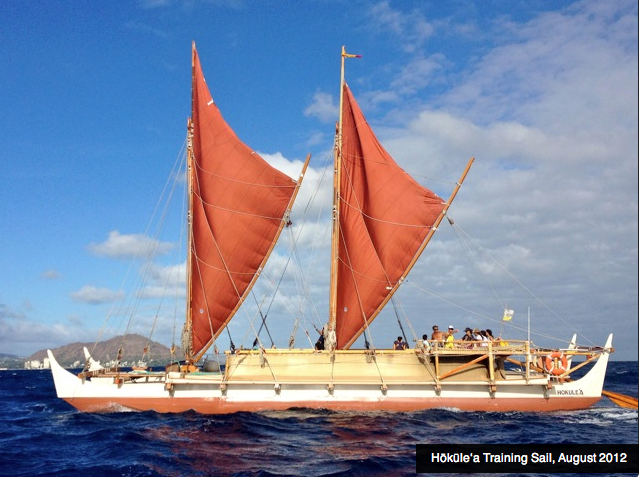 It's been forty years since the Hokulea came into being. Hawaiians wanted to understand just how their ancestors made such a fantastic voyage from the Marquesas to Hawaii without charts,compass or sextant. A society was formed and a large canoe constructed. Modern materials were used because the trees traditionally used to construct the large double hulled canoes were long gone from Island forests. Hokulea was a bold experiment but it was not to succeed without sacrifice.

In March of 1978 the vessel capsized in a storm off the Island of Lanai. The crew clung to the bottom of the hull without their emergency beacon. Eddie Aikau, an experienced surfer and lifeguard launched his board and paddled into the storm to try to bring help from Lanai. He was never seen again. A Hawaiian Airlines plane spotted an emergency flare from the canoe and all of the crew except Eddie was rescued.

Future voyages would include many more safety precautions, but the purpose remained the same. Prove that such voyages were possible. The Hokulea made successful voyages to Tahiti and other places. Micronesian and other Pacific Island navigators taught the Hawaiians ancient navigation techniques and today there are canoes travelling throughout the oceans.

A second Hawaiian canoe, the Hawaii Loa was constructed from large old-growth logs donated to the Polynesian Voyaging Society by Native Alaskans. That vessel is more traditional in construction and has traveled in Alaskan Waters.

In my novel Kolea, you will be able to read about the construction of such a canoe. For lots of good pictures and descriptions of the existing canoes go to the Polynesian Voyaging Society web site at www.hokulea.com.  Thanks for reading my blog.
Posted by Unknown at 6:39 PM