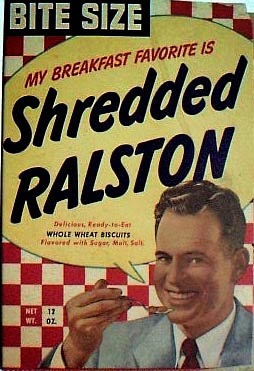 Before everything came coated in sugar and corn syrup there were boring breakfast foods. No one talked about the need for fiber in the diet except our constipated elders. Along with thousands of other kids I was suckered into saving the box tops from the cereal I had badgered my mother to buy. Shredded Ralston, Cheerios, and whatever else the Lone Ranger and Tonto advertised showed up on our table and I think my mother, a paragon of parental wisdom, wouldn’t let me cut off the box tops until the cereal was eaten. Early incentives.

Then the day came when I had collected enough box tops and sent them in to General Mills, Kelloggs or Purina and the 30 or 60 days had passed and here in the mail was my decoder ring or the signal ring with the siren you could blow through to summon help when surrounded by natives. “Hey! Aren’t we natives?” It turned out my sisters were the only natives surrounding me while they tried to stop me from blowing the damned siren ring.

The decoder ring did not lead me to a cryptography career. And neither the Lone Ranger nor Tonto came when I blew on the siren. Either Sky King or Tom Mix, (these things get confusing after a while.) sent a balsa wood glider that was the tiniest thing I ever saw and the slightest wind would blow it three blocks into someone’s yard with me chasing it and learning lessons in futility.

I suppose the great value of ordering all that trashy box top stuff was the lesson that one should not believe everything one hears from people selling stuff. The descendants of those advertising geniuses are now selling us expensive phones that take pictures, connect us with thousands of other people’s boring pictures and can actually video a murder as it happens. There are pluses as well as minuses for the phones but you know, if you were one who sent in the box tops, that six months down the road your zphone#3h will be replaced by a zphone#3i and that those in their teens and twenties will know you are a geezer if you don’t buy the new one.

And the worst thing about all this, the very worst thing of all, is that the box top guys are now trying to sell us a new president. Believing these initial messages from either party, or their fabulously rich friends is the equivalent of blowing on the siren ring and hoping the Lone Ranger and Tonto will save you from the next international crisis, raise the minimum wage, and take off the onerous regulations keeping one from becoming the next Bill Gates.

HIYO Silver and Gittum up Scout!
Posted by Unknown at 8:51 AM