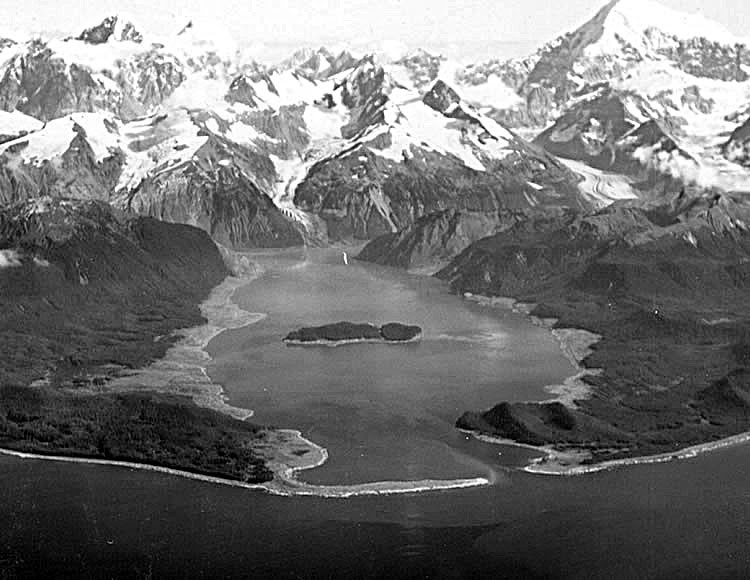 On July 9, 1958, the largest known tsunami blew out of Lituya Bay in Coastal Alaska. A 7.8 level        earthquake along the Fairweather Fault shook down 30 million tons of rock into the north arm of Lituya Bay. The rocks displaced water which drove the glacier, which was terminating in that end of the bay, to rise up about 600 feet and when it came down it shot a wave down into the bay. The light colored areas along the shore in the photo were mature forests, stripped of their trees at one location to a height of 1,720 feet. It was the highest known wave ever witnessed.

You read that correctly. There were witnesses. Three commercial fishing boats were anchored in the bay. Although it has one of the most dangerous entrance channels on the west.It is the only shelter for those fishing the Fairweather Grounds for many miles in either direction. Some fishermen were lost when their fishing boats went down. Two others washed over the sand spit shown in the foreground of the photograph, got off their sinking boat and rowed an 8 foot pram around out in the open ocean until rescuers found them. The fishing vessel Yakobi survived the wave and the captain and his son lived to tell the story. You can read their account in a government publication, Giant Waves in Lituya Bay Alaska by Don J. Miller.

Miller had actually predicted the wave. Ten years after the earthquake, I was at Lituya in my duties as a National Park Ranger. I took aerial Photos of the wave damage, and hiked the areas surrounding the bay checking on mining claims and bear poaching. I was nearly washed off the foredeck of the 72 foot MV Nunatak when we went out through the entrance channel. It is the most dangerous bay entrance I know and has claimed the lives of many sailors.

I chose this as the place the characters in my novel make landfall on their trip from Hawai'i. If I get it published you can get a feel for the place through the eyes of Hawai'ians.
Posted by Unknown at 1:32 PM